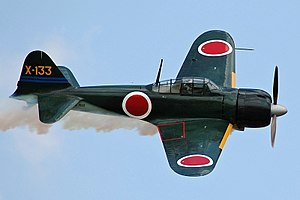 Why did the Zero have two different types of guns?

There is an interesting difference in the armament philosophies between the Axis and Allies during the war which is also reflected in the Zero and its rivals over the Pacific.  While all nations went through various stages of experimenting with different weapons systems on aircraft, the Allied nations generally standardized the armament on their fighters to a uniform bore, with some exceptions.  Most U.S. fighter aircraft were armed with six or eight .50cal machine guns, and the British adopted the .303 as their standard (although several versions of the Supermarine Spitfire contained mixed armaments). In contrast, the Axis powers often had a mixed battery. So let’s discuss why the Zero was armed with 7.7mm MGs and 20mm cannons (Mikesh, 1994, p. 101).

The preceding A5M Claude was similarly armed with the Type 97 7.7mm machine gun which was a Japanese version of the Vickers.  However, at the time of the Zero’s development, aircraft cannon were gaining in popularity. In the summer of 1935, during a meeting at the Kaigun Koku Hombu (Naval Bureau of Aeronautics), officers discussed the possibility of arming the Zero with the then in development Oerlikon 20mm cannon.  The following year, Antoine Gazda, a Hungarian Air Force officer and part-time Oerlikon salesman convinced Capt. Misao Wada (Chief of Staff of Engineering) to acquire the license to manufacture the cannon. After a series of convoluted negotiations, five engineers along with machinery arrived from Switzerland and production began in 1938 (some sources say 1937) at the Tomioka Weapon Works (whose name was changed the next year to the Greater Japan Weapon Company, Ltd. Or Dai Nihon Heiki KK).  Eventually, the FF cannon was selected and accepted by the IJN as the Type E Machine Gun Model 1. In late 1939, the designation system was changed, and it became known as the Type 99 Machine Gun mk. 1 (Mikesh, 1994, p. 25 – 27).

At this time, the Zero was still in the prototype phase, so some of the Type 99s were used on the Type 96 Nell bombers in China at the time as the Type 99 Flexible MG mk. 1.  However, these were fitted with 45 round magazines instead of the 60 round magazines as seen in the fixed configuration on the Zero. Even when the Zero became operational over China, pilots noted that the 60 round magazines were too small and the gun had a low muzzle velocity of 600m/sec.  Thus, in May 1940, the Dai Nihon Heiki KK made corrections to the weapon and increased the muzzle velocity to 750m/sec. The new model became the FFL cannon. Test firings were excellent and the new model was adopted as the Type 99 MG mk. 2 in 1941. In order to increase the magazine capacity to 100 rounds/gun, a belt feed system was devised which became standard in May 1943.  By the end of the war, production had reached 35,000 units (Mikesh, 1994, p. 27). Production rates were very slow due to Dai Nihon Heiki KK’s limited manufacturing capacity. As a result, when Nagumo’s carriers sailed for Pearl Harbor, each only had about 2-3 spare 20mm cannons for all the Zeros on board (Mikesh, 1994, p. 103).

The 20mm cannons are mounted in the wings, outboard of the landing gear, while the 7.7mm guns are mounted above the engine in front of the cockpit, each with a magazine capacity of 500 rounds.  Famed Zero ace Saburo Sakai spoke highly of the 7.7mm guns on the Zero, noting that they were reliable with few stoppages. In fact, in the first 6 months of combat, most of the Zeros kills were achieved with the 7.7mm guns due to the close in nature of the dogfighting.  Additionally, Sakai noted that the Americans decision to use the .50cal MG was ultimately better given its greater destructive power than the .30cal and faster ROF and longer effective trajectory than the 20mm (Mikesh, 1994, p. 101). With the benefit of hindsight, it is easy to note the deficiencies of the Zero’s mixed armament. Mark Peattie (2001) opines that the 20mm cannon’s low rate-of-fire and muzzle velocity made it difficult to hit a target. Additionally, the weight of both the cannon and the ammunition affected the aircraft’s performance and meant that fewer cannon rounds could be carried when compared to the machine guns. Speaking of the machine guns, the rifle caliber 7.7mm rounds were unlikely to critically damage an armored aircraft. Therefore, the Zero would probably have been better served with a uniform heavy armament like the 0.50 caliber machine guns that the Allies used (p. 92).

A common misconception is that JNAF fighter pilots did not practice deflection shooting, especially when compared with USN aviators.  This is not entirely true. Japanese pilots were aware of, and did practice deflection shooting, but the reality is that deflection shooting is easier to do with a uniform battery where all the weapons have a similar trajectory envelope and ROF.  With a mixed-battery like the Zero, you effectively have two target tracking problems for one air engagement. One for the 7.7mm and one for the 20mm. As the war progressed and the quality of Japanese pilots dropped, the differences in shooting became more and more apparent (Mikesh, 1994, p. 102 – 103).  Yet another example of the U.S. not only out-producing Japan, but also out-manning, and out-training them as well.