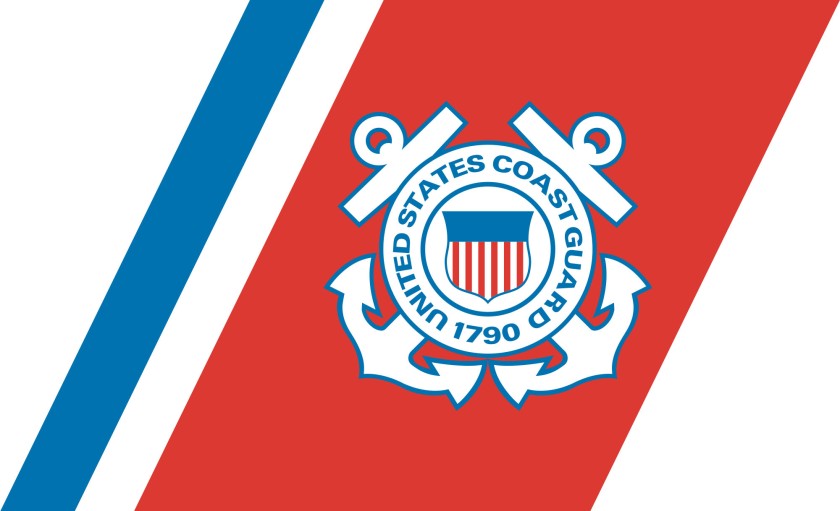 Most of the us are probably familiar with the canted red and blue stripe on U.S. Coast Guard vessels and aircraft. It is an internationally recognized symbol of search-and-rescue and law enforcement, but why do they have it, where exactly did it come from, and what does it represent?

Simply put, the racing stripe, also known as the service mark or slash, is a form of brand recognition, much in the way you identify the golden arches with McDonald’s or the Swoosh with Nike. Believe it or not, there is a history to why it came to be, and it is more modern than most people think.

Prior to the 1960s, USCG vessels were all painted in a very plain white color and were not very recognizable; with the Coast Guard constantly struggling to solidify its identity. One story goes: In October of 1956, Pan Am flight 6 Clipper Sovereign of the Skies suffered engine trouble while en route from Hawaii to California and did not have enough fuel to either make it to San Francisco or return to Honolulu. Coast Guard Cutter Pontchartrain at Ocean Station November responded to the distress call with the plane rendezvousing and circling the cutter until daylight when it ditched in the ocean. Upon rescuing all 31 survivors, one of them reportedly exclaimed, “Thank goodness for the Navy!” (Thiesen, 2012, p. 28).

There are somewhat conflicting stories about how the idea of the racing stripe initially came to be, but most agree that then President John F. Kennedy suggested that the Coast Guard needed a more recognizable image.

According to an article by Dr. William Thiesen (2012), a meeting between President Kennedy and the design firm Raymond Loewy and William Snaith, Inc. took place on 13 May 1963 where Kennedy suggested that the Coast Guard needed a more recognizable image. After the meeting a 90-day feasibility study was undertaken by Loewy & Snaith, where their findings were submitted to the USCG in January of 1964. In June of 1964, the Coast Guard signed a contract with Loewy and Snaith to begin preliminary design work with their submissions presented to the Coast Guard on 21 March, 1965. That same day, Coast Guard Chief of Staff, RADM Paul Trimble, ordered them to proceed with the prototype phase (p. 28).

However, an article by Tom Beard (2004) in the Foundation for Coast Guard History’s book “The Coast Guard,” asserts that a search for the Coast Guard’s racing stripe began even earlier. According to Beard’s article, Capt. Benjamin Engel led a board in late 1962 to “find and approve a new Coast Guard image.” Others involved in the project included Capt. Gerry Seelman of the Coast Guard HQ Naval Engineering Office who dealt with the firm Loewy & Snaith, as well as Loewy Project Manager, Joseph Lovelace, Coast Guard Chief of Staff RADM Trimble, and Coast Guard Chief of Civil Engineering, Capt. Thomas Sargent. In any case, the basic design of the racing stripe or “slash” was approved by Commandant ADM Edwin Roland in 1964, with him examining the proposed schemes and reportedly saying, “Make it go NOW!!” (p. 358)

The design consists of wide orange bar forward of a narrow blue bar with the Coast Guard emblem superimposed on top. The bars are canted at 64 degrees forward. The blue represents the sea and the orange is internationally associated with search and rescue.

Dr. Thiesen (2012) notes that the prototype designs were tested at various Coast Guard units in Florida due to the large variety of assets there. Prototype designs were affixed to the cutters Diligence and Androscoggin as well as a number of buildings and vehicles. One of the early designs had a stylized Coast Guard shield as the emblem instead of the more traditional crossed/fouled anchors seal that is common today. The finalized design of the racing stripe was officially adopted on 6 April, 1967. Interestingly, it took a number of years before the symbol was added to all Coast Guard assets, with the change initially meeting some resistance. It was not until 1975 that the training vessel Eagle finally added the slash, making her the last Coast Guard vessel to finally add the racing stripe (p. 28-29).

In case you did not know, there are actually variations of the racing stripe within the Coast Guard depending on the surrounding color that it is affixed to. We are all familiar with the narrow blue and wide red stripes, but the orange MH-65 dolphin helicopters and red-hulled icebreakers sport a white version of the slash. However, you do occasionally see dolphin helicopters with a white-colored fuselage, in which case their racing stripe is the normal blue and red.

No, that yellow Jayhawk is not a livery mistake. It’s painted yellow for the Coast Guard aviation centennial. Note that it has no racing stripe!

The Coast Guard Auxiliary has the colors of the stripes reversed.

According to COMMANDANT INSTRUCTION M5200.14A dated April 12, 2011. The official colors of the mark are based on the Pantone Matching System with the colors being PMS 307C for the blue, and PMS 179C for the red (p. 3-1). The Auxiliary actually has slightly different colors, with PMS 185C for the red and PMS 280C for the blue (p. 7-9). In the absence of the Pantone color system, the colors are designated simply as blue and red (p. 3-1). Oddly enough, while the colors are standardized, a simple google search will turn up a slew of different colors for the racing stripe with many showing a much more orange color.

Since its adoption by the U.S. Coast Guard, over 50 other countries have created their own versions of the racing stripe. The mark has become an instantly identifiable symbol of coast guards throughout the world and serves as just another example of effective brand recognition (Ostersehlte, 2012, p. 31).

Ostersehlte, C. (2012). The History of the “Racing Stripe” Emblem and Brand Identity for World Sea Services and Coast Guards Part II: The Rest of the World. Sea History, 139, 31-33.