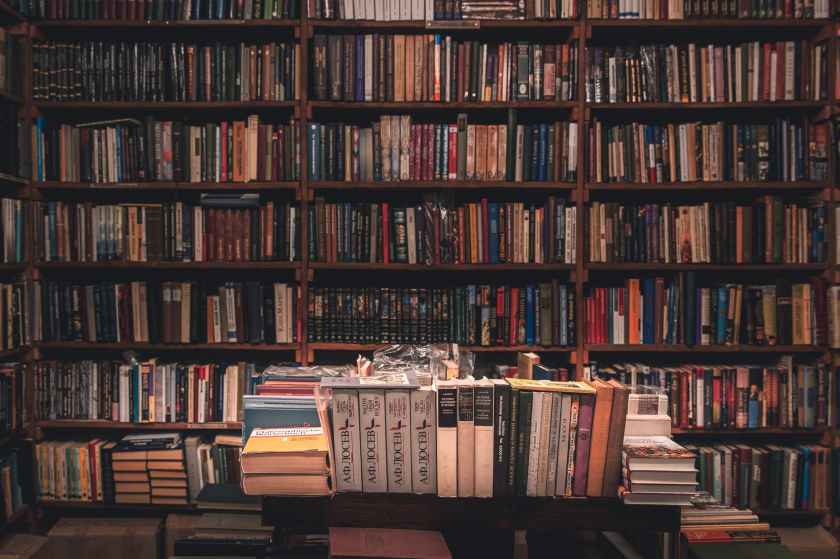 Reading is something that did not come naturally to me. It seems rather odd considering many of my friends would consider me something of a bookworm. However, believe it or not, I struggled with learning to read when I was young.

I suspect the reason for this is because I was actually born about two and a half months premature, thus I think I’m slightly developmentally delayed (I’m lucky it’s not worse, actually). For all I know, I’m somewhere on the autism spectrum.

*Note: I’ve never been formally diagnosed with any kind of mental disability or learning disability. But, I am a little slow on the uptake and sometimes have difficulty with picking up on social cues. Thus, my premature birth is mostly likely the cause of this.

I have been exposed to libraries since I was a child. Of course, my schools had libraries (although we call them “media centers” nowadays) and I would often check out books from there in elementary school. And who could forget those Scholastic book fairs. Apart from those experiences, I would occasionally go to the local city library to check out books.

It was not until college that I actually started to really enjoy libraries. It makes sense because of the academic pressure students are under. I spent many hours in the school library when I was in college and graduate school, often upwards of 6 hours a day. The funny thing is that there were as many people falling asleep in those libraries as there were people studying. Professors give a lot of homework and there are only so many hours in the day.

As an undergraduate and graduate student I would frequent the university library in lieu of the public library. For one thing, depending on the school, only students and staff can use these spaces. Secondly, academic libraries are specifically designed to help students with specific research needs. They often have access to materials from other schools or databases that your normal public library wouldn’t have. Furthermore, you have free access to many academic databases for locating research articles.

In case you’re wondering, I’ve yet to spend a day or two rummaging through an actual archive (like the National Archives) and sift through scraps of paper. Maybe someday.

Reading and the mind

I believe reading is to the mind what exercise is to the body. Reading strengthens the mind. Although at this point in my life I’m basically trying to keep my mind sharp before middle age takes hold.

Indeed there is a body of psychological research out there that suggests a correlation between a person’s reading level and their academic performance. I’m not going to go into detail, but if you’re interested, you can read the work of Anne Cunningham and Keith Stanovich. Of course, correlation does not equal causation, but based on my anecdotal experience, I can tell you that there’s a lot of reading involved in the study of history (not to mention many other subjects). Simply put, if you can’t read well (in any language) then you’re going to have a tough time in school.

Barring any Specific Learning Disability (such as dyslexia), I find that students who were not exposed to much reading as a child tend to struggle in my class. Either they were never read to as a child or there were no books (including children’s books) in their home. Yes, I have actually encountered students with that kind of deprived childhood. This is not to disregard any number of other factors that may affect their academic life, but since I’m a history teacher I give a lot of readings. If I see a student struggling with the readings, then one of the first questions I ask is, “How much do you read in your free time?” Usually the answer is little to none. Then I ask, “How much did you read when you were little?” Usually the answer is the same.

I want to be clear that just because a student struggles with reading or reads very little, it doesn’t mean they can’t be successful in my class. I often provide material from Newsela which publishes articles at different reading levels. The problem here is that the reading level of these book-deprived-kids is often so low that they’re still reading at an elementary school level in high school (I kid you not!). So essentially they’re at a major disadvantage when compared to their classmates who are reading at or above their age and grade level.

In contrast, when I see students walk into class carrying thick pieces of literature with them, that usually tells me that they read in their free time. Usually this is some kind of young adult literature, often from the fantasy genre, and the covers have pictures of wizards and dragons on them. I basically described the average teenage nerd, but even though the writing in those books is not terribly complex (or even that good), the ability to read a substantial narrative does affect a person’s academic ability in a positive way.

My Own Personal Library

One of the things I want in my future home is a personal library/study. Basically a room with wall-to-wall and floor-to-ceiling bookshelves. Add a big desk, some comfy chairs, lamps, and a large table or two.

What I don’t Love About Public Libraries

While I’ve come to enjoy spending time in my local public library quietly reading or doing online research and writing, there’s some drawbacks to the experience.

Since it is a public space, anybody can use it. This includes people like:

They stink, for one thing, and some of them use the library bathrooms to shave and bathe in. You can always tell who these people are because their body odor usually precedes or emanates from them. There have been a few times where I’ve been in the library and had a homeless person sit near me. Their stench was so strong that I had to get up and move away from them. When I sit in the library, I don’t want to be reminded of the inside of my trash bin. If not for the stench, then they are often seen carrying around all of their belongings in large hiking backpacks. They have a generally unkempt appearance and wear multiple layers of clothing. One time, I even saw a guy actually bring in a small camp stove and attempt to cook a meal in the library before the staff kicked him out!

*Note: I understand that homeless people come from all walks of life, not all are weird drug addicts, and some are working professionals who simply can’t afford to pay the rent. Sadly, this does not seem to be the case at my local library.

This sometimes coincides with the homeless people, but I’ve seen people ramble on to themselves and whoever they’re having an imaginary conversation with while sitting in the library. They don’t speak in whispers either, rather, they use their normal talking voice. I don’t think they’re talking to themselves in any normal way because their conversation topics range all over the place and seem to follow no coherent narrative. For example, I once heard a guy ramble on (and repeat himself multiple times) for 30 minutes about some strange governmental oppression of black people and aliens (kid you not!).

The sad thing is that some of these people get hostile when asked to quiet down. They do the exact opposite and not only get louder, but occasionally get violent as well. I’ve seen a few instances where the police have been called to come and take one of these lunatics away…usually in handcuffs.

Pretty self-explanatory, but some people seem to forget that you’re supposed to be quiet in a library. Umm…news flash! Just because you have a phone and a mouth that breathes oxygen does not mean you need to use both in an incessantly loud and obnoxious manner!

Thank God this is not common, but I have seen it happen. ‘Nuff said.

I hope we have physical libraries around for millennia to come. Call me old fashioned, but there’s something about picking up and reading through a physical book that cannot compared to reading off of a screen or an e-book reader.

Public libraries offer a host of free services and many are paid for with tax dollars. My local libraries offer homework/tutoring services, career advisors, research assistance, wifi access, and of course check-outs for books, e-books, and videos.

Librarians themselves are also a valuable resource. Never mind the stereotype of the lonely and stodgy old librarian. Ever wonder why there’s such a degree as a Master’s of Library and Information Sciences? It’s because those people know how to use databases, archives, and catalogues. They’re not only found in libraries, but also in any field that requires the use of information sciences. They can often find materials faster and better than a Google search.

I think one of the biggest benefits of being in a library is that it removes you from distractions at home. It gets you out of the house and into an environment that specifically caters to an atmosphere of learning. Of course, you could always connect to the library’s wifi and get your entertainment on your device, but you are also removed from a lot of the conveniences of home, as well. Hence, I feel that there is a stronger impetus for learning in a library.