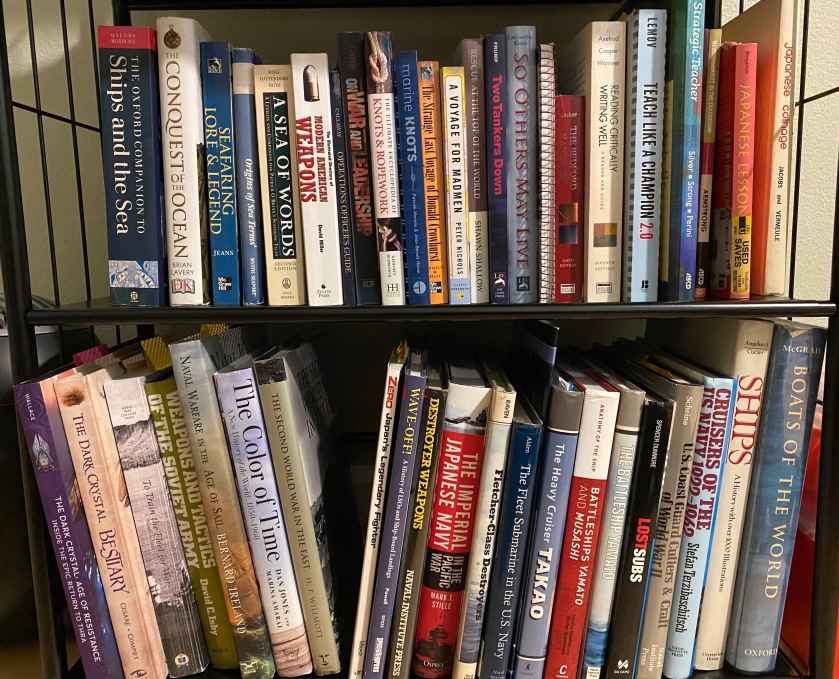 Published in 2018, this book is a study of WWII aircraft carriers and their flight operations. The book is organized as follows:

Unfortunately, this book’s thesis is not very clear (and that lack of clarity is greatly reflected in the rest of the book). In fact, I’m not even sure there really is a thesis to this book. The best I can find is at the end of the introduction where Celander writes that this book examines the tools of carrier operations, how carriers were used in battle, and then how carrier battles played out and why. With this basic layout in mind, by using some simple combat modeling, the author attempts to answer the question of “how carriers fought.”

See what the problem is? The thesis is essentially the book title. This book will explain how carriers fought. The author is merely explaining what the content of the book is, but there’s no real point or argument to be made.

I’ve been unable to find any other information on Lars Celander, but the biographical blurb on the dust jacket says that he holds a Master’s degree in physics and worked as a systems engineer during his military service. (What branch or military he served in isn’t specified.) It also claims he has operational experience with radars, missiles, and guns. Of course, how much stock you put into that biographical blurb of text is up to you.

At first glance, this is a very unique book in terms of its content and what it sets out to do. However, the more I critically examine it, the more problems I have with its writing and historiography.

This book covers the very niche topic of examining the differences in WWII aircraft carrier operations between the U.S. Navy, Royal Navy, and Imperial Japanese Navy. More than just a narrative on the battles involving aircraft carriers, this book also provides details on how carriers conducted flight operations. Details like carrier elevator cycle times, aircraft radio types, navigation methods, etc., are covered. While these may seem like insignificant factoids, some of them did impact the flow of aircraft carrier operations and would be apparent if you were to put these carriers side-by-side and compare them. Basically, the content of this book was what I was expecting, but didn’t get, when I read Titans of the Seas. (i.e. an analysis of carrier flight operations between the USN, RN, and IJN in WWII.)

Aside from the interesting details about carrier flight operations and task force organization, the author’s examination of carrier battles through the use of combat modeling (essentially a type of wargaming) is unique to this type of historical literature. The use of modeling helps the reader get a better sense of the dynamics of these historical situations. Sadly, this is where the positives end.

Unfortunately, this book has many problems with its historiography which greatly hinder its readability and make its historical validity questionable. The biggest issue with this book is that the content, while topically relevant, is not very coherent in how it all ties together. The book is more or less an assortment of discussion topics related to the doctrine and tactics of carrier operations. The content jumps from topic to topic and frequently goes on tangents, which makes it difficult for the reader to understand how it’s all supposed to be synthesized together. It seems as if this book is unsure of what audience it’s written for. As a result, it comes across as a very poorly written history.

The writing is fairly sophomoric. It’s full of typos, has poor transitions, and the wording itself is a bit clunky. I get the impression that writing isn’t Celander’s strong point. In fact, his logic is a little strange and he occasionally contradicts himself. I’m not expecting some Pulitzer Prize winner here, and I know I’m picking apart his grammar, but the book is in desperate need of further proofreading, revision, and editing. There are multiple areas where I felt that the information or data could’ve been better presented in a table or with a more detailed diagram/map. Other parts could’ve been excised completely or greatly expanded on. I can’t help but feel that Celander was rushing to meet a publishing deadline because parts of the book seem woefully underdeveloped.

I almost get the feeling that this book was meant to be a detailed analysis of the tactical and doctrinal aspects of carrier warfare; almost along the lines of Evans and Peattie’s Kaigun. Strangely, Celander will spend several pages covering seemingly tangential material (such as the use of carrier pigeons…yes, really), but devote only a few sentences to other things like combat air patrol patterns. Tangents such as these leave the reader with lingering questions, such as how were the combat air patrols organized? Where were they in relation to the carrier? How long did they last? On occasion, Celander also makes some very questionable claims. For example, he writes that fighter planes would have to “snipe the tail gunner” of a bomber before taking down the target. While I’m no fighter pilot, and aircraft in WWII were certainly not as fast as today’s jets, I suspect that air combat is not an exercise in sharpshooting. It’s claims like these that leave me incredulous. While the book contains a fairly decent bibliography with a good mix of primary and secondary sources, it’s severely hampered by a lack of citations (i.e. there are no footnotes or endnotes). This is a particular problem with this book because it deals with a lot of technical details and facts. Therefore, citations that specify where specific items of information came from would greatly enhance its utility for further research. Additionally, since the book is arranged topically rather than as a linear historical narrative, the reader needs to know where the information came from so they can put it into further historical context. After reading a section, I frequently asked myself, “where exactly did this piece of information come from and how did Celander come to that conclusion?” Related to the lack of detailed citations, Celander engages in some alternative history and combat modeling in the latter half of the book. More often than not, the conclusion he states goes something like, “if Japan had done _____, then the situation would’ve turned out as _____.” The problem is that Celander makes these types of broad (and rather dubious) statements without qualifying or quantifying them with any further data. Again, I kept asking myself, “how did you [Celander] come to that conclusion, and what data or historical evidence did you base it on?” It’s almost like reading a social media post that makes a claim with no corroborating evidence. At other times, Celander doesn’t even bother to come up with a conclusion, and others are very weakly substantiated. Had Celander taken the time to put in citations, provide more data/evidence, and thoroughly explain how he derived his conclusions, then his evaluations would be much more valuable.

Part three of the book has the author attempt to apply some combat models to carrier warfare. He notes the famous Lanchester N-squared law and Wayne Hughes’s salvo model but fails to give the relevant equations or go into more detail about how he applied them to his combat modeling. Here are the equations for those who are interested:

The following two equations concern the attrition rates of two forces (A and B). At any given time, with two forces of equal skill, the rate of casualties is proportionate to the number of remaining forces, and the ratio of forces continuously favors the larger initial force.

When put together, the following equation results:

The equations depict two forces (A and B) engaging in combat and yield the number of enemy ships (∆A or ∆B) put out of action by a salvo (missiles, kamikazes, etc.).

Ironically, Celander says that he isn’t engaging in alternative (AKA what if?/counterfactual) history, but proceeds to use his own home-cooked combat model to do just that. He’ll often contradict himself in this section and some of the conclusions he comes up with are…strange, to say the least. It’s not helped by the fact that he doesn’t elaborate on his conclusions very much. As with earlier parts of the book, Celander will often cover seemingly important information in a very cursory manner. Additionally, many of his examples seem to be cherry-picked and a few examples are totally irrelevant.

Finally, since it’s lacking in a well-constructed thesis, the book similarly ends on a weak note. The last chapter has almost no discussion to tie all of the book’s elements together into anything cohesive. It merely ends with a comparison between WWII and modern carriers. Even at that, it speaks in generalizations.

Overall, this book is a very interesting idea with a very underwhelming execution. If anything, it could really use a revised and updated second edition. Even by trimming a lot of the extraneous material, the topic is broad enough to easily make the book twice as long and ten times as detailed if Celander’s writing was more focused. This book has potential and it fills a particular niche. Unfortunately, it’s handicapped by a lack of a solid thesis, no citations for the technical details, fuzzy logic, odd grammar, and sloppy organization.