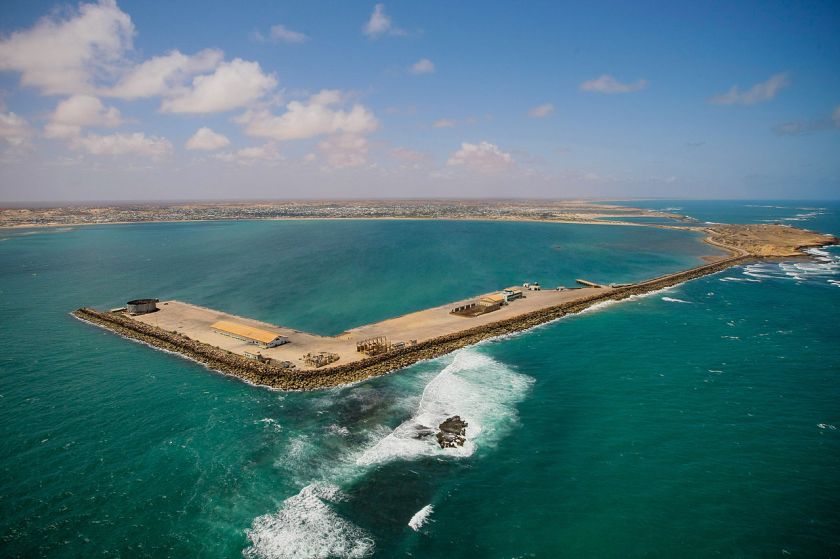 As far as I can tell, there is no (publicly available) evidence to show that there was a operation conducted by the U.S. Navy and U.S. Marines to capture an Al-Jabaab (al-Shabaab?) terrorist courier on the night of 13-14 May 2013. However, this may be tangentially linked to (or inspired by) the Battle of Kismayo where the city was retaken from the Al-Shabaab in September-October 2012 by African Union forces. Prior to being ousted from Kismayo, al-Shabaab exploited the coal trade for profit, but currently they operate mostly in the rural areas of Somalia with their base around Jilib (BBC, 2017, paras. 19-25).

An element of SEAL Team 2, callsign Coyote 4, is currently observing the airstrip at Jilib. Intelligence suggests that an aircraft that is due to land there shortly (a Cessna 208B registration 6O-SVK) is carrying a high-ranking al-Jabaab member acting as a courier between the Somalian arm and their contacts in the Middle East. It is anticipated that once on the ground, the courier will travel to a safe house and meet with other al-Jabaab leadership. This represents an excellent opportunity to capture the courier and gain vital intelligence on al-Jabaab activities.

Coyote 4 is already in position at the Jilib airstrip. A company of Marines has loaded into a flight of 4 MV-22B Ospreys (callsign Cactus) and will be the designated ‘snatch team’ once the courier arrives at the safe house. The Marine Air Combat Element has assigned a flight of AH-1Z Vipers (callsign Snake) to support the landing, as well as a flight of AV-8B Harriers (callsign Pine Tree).

The air element aboard USS Independence is available to support the operation and consists of an MQ-8B Fire Scout (callsign Paint) and an MH-60R Seahawk (callsign Pepperoni). The Independence aircraft are designated as ISR support for this operation.

Identify and capture an al-Jabaab courier.

*Note: times reported in ZULU Time to the minute.

The MQ-8B Fire Scout UAV immediately launches from the USS Independence and proceeds toward the Jilib airfield. At 2325, Coyote 4 transmits the message, “We’ve spotted the courier. He just got into an SUV and is being driven off to the South in a convoy of civilian vehicles. We won’t be able to keep up with them. Recommend you maintain visual contact with an unmanned asset, out.” At 2335, the Fire Scout locates and positively IDs the courier convoy. (One minute later, the terrorist courier convoy positively IDs the Fire Scout, as well.) At 0012, the UAV operator spots the safe house, begins identifying fixed emplacements, and transmits, “We’ve spotted safe house. It’s a real hornet’s nest down there!” USS Kearsarge then receives the following transmission, “CENTCOM ACKNOWLEDGES YOUR REPORT OF LOCATING THE AL-JABAAB SAFE HOUSE. YOU HAVE A GREEN LIGHT TO PROCEED WITH INSERTION OF GROUND FORCES AND CAPTURE OF THE COURIER AS PLANNED. GOOD HUNTING AND GODSPEED.” From 0012-0014, the Fire Scout locates several enemy ground units including infantry, armed technicals, and ZU-23-2 and ZPU-4 anti-aircraft guns.

At 0049, Cactus #1 carrying the Marine ‘snatch team’ launches from Kearsarge. At 0105, the Marines land and proceed to the safe house. At 0114, the Marines transmit, “We’ve captured the courier. Ready for extraction.”

This is another good scenario for beginners with small, simple, and sequential objectives. Another tactical operation with a small number of moving parts. The use of naval air assets for reconnaissance, strike, and the cargo delivery of ground forces is one of the mainstays of CMO‘s gameplay. However, the deployment of cargo (infantry in this case) is a tricky, if somewhat frustrating, element to this scenario. I had to review how to perform cargo drop missions to make sure I was able to complete this scenario. You see, the cargo loading/unloading mechanic was something of a late feature to the earlier CMANO platform. As a result, it’s not very straightforward and requires some very deliberate and specific steps to make it work properly. Although the briefing says the Marines are being loaded into the four MV-22 Ospreys (implying that you need to take no action), and the aircraft management page notes that the loadout for Cactus is 24x Marines, in reality, you still have to go to the USS Kearsarge’s cargo page and transfer the Marines into the Ospreys yourself. Otherwise, the Ospreys will take off with no cargo loaded aboard them.

The beginning of the scenario had the straightforward objective of locating and following the courier convoy. The use of the MQ-8B Fire Scout drone was not necessary and the MH-60R Seahawk could’ve been used instead if you prefer. However, since I didn’t know what kind of opposition the convoy or local terrorist units posed, I used the Fire Scout under the assumption that it’s better to lose a UAV than a manned helicopter. Interestingly, according to the log, at 2336, the courier convoy ID’d the Fire Scout as a hostile UAV, yet took no offensive or evasive action. The U.S. side effectively lost the element of surprise, and no points were lost for being detected, either. Perhaps these terrorists were just incredibly stupid, inept, or overly confident in the air defenses around the safe house.

Once the Fire Scout located the safe house and pinpointed the defenses around it, I ordered it to RTB and sent in the Harriers to specifically target the biggest anti-air threat (ZPU-4s). The Super Cobras easily worked over the remaining threats and the Marines landed without encountering any opposition.

Overall, this is another easy scenario for beginners but is complicated by the fact that it requires an understanding of how to coordinate air assets and use the game’s cargo mechanic. We accomplished all of the objectives and achieved a score of 2900.

As with War Game #1, the biggest lesson here is the reinforcement and application of the game’s basic mechanics. In this case, the scenario works with the use of air units. The inclusion of a simple cargo mission adds some complexity to the coordination of the air and ground assets.

Short of getting air assets shot down or sending the Marines into the slaughter, what sort of alternatives, of undoubtedly many, could we postulate?